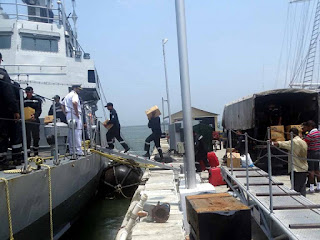 NEW DELHI, 10 April 2016
A major fire was reported at  the Puttingal Devi Temple in Kollam in the early hours of Sunday, 10 Apr 16 following which the Southern Naval Command at Kochi pressed into action medical team along with equipment and materials using ships and aircraft.
Six Aircraft (Two Dornier fixed wing aircraft, two ALH helicopters and two Chetak helicopters) and three IN ships namely Kabra, Kalpeni and Sunayna were earmarked for the requirement. Two ALH with a nine member medical team along with three doctors, paramedics, supplies and equipment was rushed to the scene at 1130 hrs. The helicopters landed at the Ashramam Ground, Kollam at 1200 hrs. One Dornier aircraft from Kochi was positioned at AF Stn Trivandrum since noon.  The rest of aircraft were stand by at Kochi foe any emergent need. 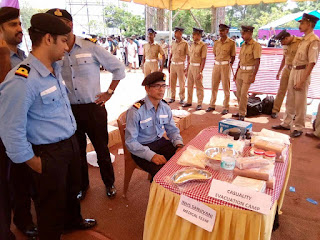 IN ships Sunayna, Kabra and Kalpeni were sailed immediately from Kochi with 200 KGs of medical supplies and medical team. INS Kabra and Kalpeni reached alongside Kollam jetty at 1600 hrs while INS Sunayna is off Kollam awaiting instructions as per situation. The medical supplies have been handed over to the local administration. Ships have kept blood donors ready to meet emerging requirements of Blood.
A relief camp has been set up at Kollam to co-ordinate all relief activities by the Navy, which was visited by the CM of Kerala.
Regular contact is being maintained with state officials. Ships as well as medical teams have been directed to remain at Kollam for rendering assistance.