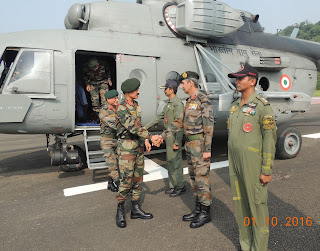 NationalDefence Bureau,
New Delhi, 01 October 2016
Chief of The Army Staff, General Dalbir Singh along with Deputy Chief of Army Staff (Planning & System) visited  Headquarters Northern Command at Udhampur today.  The General was briefed by Lieutenant General DS Hooda, on the overall security situation in the Command theatre.  The Army Chief interacted with the Corps Commanders and took a first hand assessment of the prevailing security situation & operational preparedness.
The Army Chief also interacted with the troops who participated in the Surgical Strike Operation & conveyed his appreciation and best wishes to them.
Subscribe NationalDefence on youtube