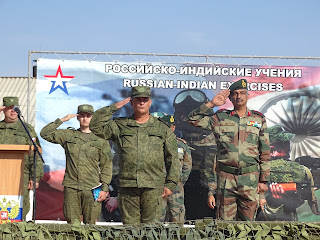 Brigadier Sukrit Chadah addressed the parade and expressed great satisfaction with the high standards achieved in the joint training exercise. The contingent was also addressed by Maj Gen Andrei Ivanovich Sichevoe, COS of the 5th Army of Russia. Fifteen personnel from each side were awarded medals of excellence for their outstanding performance during the exercise. Closing ceremony was also attended by the Vice Governor of the Primosski krai Province and members of the district administration. 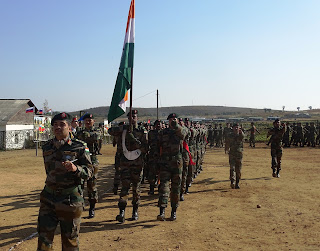 Eighth in the series of bilateral exercises under this banner, the joint exercise this year focused on conduct of counter insurgency / counter terrorist operations under UN mandate in semi mountainous and jungle terrain. The exercise also provided an opportunity to both the armies for greater cultural understanding, sharing experiences and strengthening mutual trust and co-operation.
Participants from both the Armies expressed immense satisfaction at the conclusion, in terms of the standards achieved in the validation phase of the training.  Validation Exercise which was spread over three days included Securing of Assembly Area, Axis Clearance, Occupation of Blocking Position, Isolation and finally neutralization of a group of terrorists. Both the contingents are carrying home, cherished memories of the warm bonhomie generated and the outstanding professional association established amongst the two Armies. Indian Army contingent will depart for India on 03 Oct 2016.