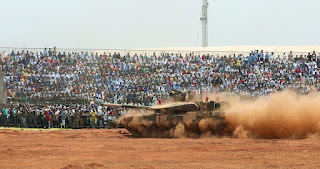 National Defence Bureau
Goa, 31 March 2016
A very large crowd turned up on the concluding day of Defexpo 2016 making the event a grand success.  While many visitors travelled from far reaches of Goa and adjoining districts, the largest response to the exhibition was received from the local population who visited in large family groups. Enthusiasm was also evident among organized groups from schools and colleges and visiting youth who were curious and showing keen interest in defence technology. 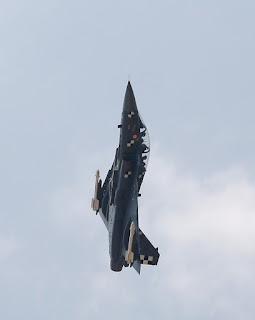 Live demonstration of Sarang Aerobatic Display team of the Indain Air Force, Light Combat Aircraft (LCA) (being developed by Aeronautical Development Agency), Main Battle Tanks Arjun Mark I and II, Wheeled Armoured Platform and display by Scandinavian Aerobatics Team enthralled the spectators.
The Defexpo 2016 held outside New Delhi for the first time at Naqueri Quitol, Quepem Taluka, South Goa, concluded today after four days of hectic activities.   The Exhibition was the largest exhibition of its kind in the country with an underlined theme of ‘Make in India’ with 1055 (with Indian companies outnumbering foreign once) companies, over 900 delegation visits and 47 countries participating in the event.  An event of this scale was made possible by the whole hearted support of people and various agencies and availability of tourist / business infrastructure, such as hotels and connectivity, in the host state of Goa. The people of Goa lived up to the reputation of being excellent hosts.
Also read: LCA Tejas Fired R 73 Missile Hitting The Flare Target During Iron Fist 2016