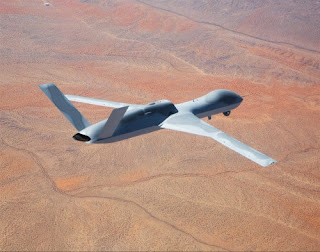 NEW DELHI, 09 April 2016
India is in talks with the United States to purchase 40 Predator surveillance drones, officials said, a possible first step towards acquiring the armed version of the aircraft and a development likely to annoy Pakistan.
India is trying to equip the military with more unmanned technologies to gather intelligence as well as boost its firepower along the vast land borders with Pakistan and China. It also wants a closer eye on the Indian Ocean.
New Delhi has already acquired surveillance drones from Israel to monitor the mountains of Kashmir.
As defence ties deepen with the United States, which sees India as a counterweight to China in the region, New Delhi has asked Washington for the Predator series of unmanned planes built by privately-held General Atomics, military officials said.
“We are aware of Predator interest from the Indian Navy. However, it is a government-to-government discussion,” Vivek Lall, chief executive of US and International Strategic Development at San Diego-based General Atomics, told Reuters.
The US government late last year cleared General Atomics’ proposal to market the unarmed Predator XP in India. It was not clear when the delivery of the drones would take place.
The navy wants them for surveillance in the Indian Ocean, where the pilotless aircraft can remain airborne for 35 hours at a stretch, at a time when the Chinese navy is expanding ship and submarine patrols in the region. READ MORE