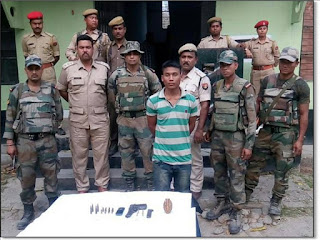 Based on specific information on movement of an NDFB (S) cadre, a team of Indian Army and Baksa Police launched a joint operation on 18 March 2016 and nabbed a cadre of NDFB (S) mov through village Anand Bazar. The Cadre have been identified as Daithun Boro @ B Dekhreb S/o Gajan Boro  R/o – Vill – Halongbari PS – Goreswar, Distt – Baksa.
The cadre had underwent training in the 41st batch in Bhutan and was actively involved in extortion, arms smuggling and other nefarious and anti national activities. One 7.65mm Pistol along with four live rounds of 7.65mm, one No 36 hand grenade, four live rounds of AK-47 ,eight live rounds of  9mm, two leafs of extortion pads and one  mobile  phone were recovered from the apprehended cadre.
The apprehension of these important cadres is significant towards thwarting the subversive plans of NDFB (S) for upcoming elections. The apprehended cadre has been handed over to Police Station Tamulpur on 18 March 2016.