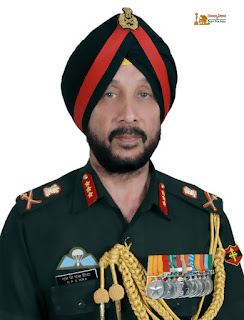 Udhampur, 12 March 2016
Lt Gen NPS Hira, who is presently posted as Chief of Staff of Northern Command at Udhampur in J&K, has been posted to Army Headquarters in Delhi to take over as Deputy Chief of Army Staff with effect from 14 March 2016.
The General was commissioned in the Sikh Light Infantry and has a rich experience of counter insurgency operations in J&K and in the North East region, as well as conventional operations in Western Command.
He has had a distinguished career spanning various Command, Staff and instructional appointments. He commanded the Battalion in Assam (Op RHINO) during the high violence period.  The unit bagged 32 gallantry awards and CoAS citation under his command.
He later commanded 12 Infantry Brigade in the strategic Uri sector deployed on the Line of Control. The Brigade earned an Ashok Chakra, Kirti Chakra, Shaurya Chakra and many more gallantry awards during his command. The General commanded the 10 Infantry Division in the J&K on Line of Control with distinction for which he was awarded the Ati Vishisht  Seva Medal.
The General commanded 11 Corps “Defenders of Punjab” at Jalandhar.  Thereafter he was posted as Chief of Staff of the most important Northern Army battling insurgency in J&K, Siachin Glacier and Line of Actual Control with China in Leh – Ladakh region.  He is moving to Army Headquarters with an extensive on ground experience of all types of operations. The General is also the Colonel of the Regiment of the Sikh Light Infantry.
Also watch Iron Fist 2016 Promo