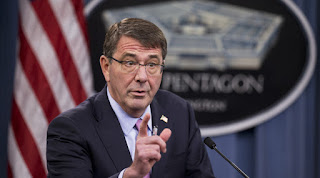 PENTAGON, 09 April 2016
Talking about the first stop of his trip, India, Ashton Carter, Secretary, US Department of Defense (DoD) said that he will meet in India with Prime Minister Narendra Modi and Defense Minister Manohar Parrikar to discuss a number of initiatives, including progress in aircraft carrier, jet fighter, and jet engine collaboration.
Carter said he will talk about “exciting new projects” as well. There is so much potential with India, he said, that the United States is “seizing every opportunity we can.”
Democracy and freedom have spread across the region, the secretary said. He highlighted economic successes in Japan, Taiwan, South Korea, Southeast Asia, China and India.
Carter will have a meeting with Defence Minister Manohar Parrikar onboard INS Vikramaditya, India’s Air Craft Carrier. He will be in Goa on 10-11 April. A joint press briefing will be in New Delhi on 12 April 2016.
Strengthening Ties to the Region
Carter called for the passage of the Trans-Pacific Partnership trade pact, calling it “one of the most important strategic parts” of the rebalance to the region. The TPP will unlock economic opportunities for the U.S. and many of its partners, he said.
Strengthening alliances and partnerships in the Asia-Pacific region will be the focus of his visit to India and the Philippines, he said… READ MORE